I walked through those doors pretty certain of the outcome. If I had to put money on it, I would’ve bet a win. For me. As I set waiting for the judge to come out to deliver his truth, I wrote this one line, “God, your will be done. Not mine.” 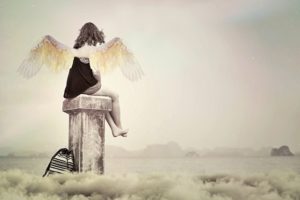 Then our turn came. The request I was asking for would be decided. The peace I was trying to give my daughter would be on the line. And it was in the hands and at the mercy of a Los Angeles County judge.

While on hold for the court’s lunch break, I had hoped while enjoying his pb&j sandwich or milk and cookies, this judge would be hit with the epiphany of truth. I was hoping his stack of cookies would give him the wisdom to ask the right questions and my girl would get an extended break from the emotional rollercoaster that she so desperately needed.

Sometimes God serves up a mighty warm dish of trust, in very hard places and my plate was filled to capacity.

As I walked out and sent my sister the judges answer she text back, “He probably totally thinks he won”.

And that folks is what this all boiled down to. This is what I had to unwrap my mind from. This is what created my anxious heart and made me feel like a loser.

My baby girl’s heart is pretty darn close to being worth more to me than anything in this world. I wanted to win because I wanted to save her.

And that in, lies the problem.

As I began to gather my fragile and wounded spirit up off the floorboard of my vehicle on the 30-minute drive home from the courthouse, it took one phone call from a dear friend to unravel my heart.

My thoughts consumed me like a flaming wildfire that melted away any strength I was hanging on to.

The phones were wide open. Visitation a go. The temporary restraining order was no longer in effect. The six weeks of mental and emotional stability we had worked so hard to salvage could possibly come to a halt. I couldn’t stop a thing. All I was trying to protect her from, had full and complete access to my baby’s heart.

For the next forty-eight hours I would work hard to re-write the truth and separate my mind from the lies.

In all the thirteen years of court dates, awaiting a judge’s final decision, co-parenting or lack of, I had forgotten one thing:

My God has consistently demanded my trust be in Him and yet again, I took my eyes off Jesus.

Instead, I began to anchor myself in what I could control. Sure, it was an honest and desperate attempt of safety. But when my security became dependent on a judges decision instead of a God that I know has called me to trust in him first, I had got off track.

We do this. In an attempt to create security we begin to place physical barriers of safety that will ensure us a promise of something tangible. Because intangible sometimes is not an option.

In a good effort, as we’ve been properly groomed by our family or society, we put an alarm on the house, we try to get our kids into a half decent school, a home in a neighborhood we feel safe in, and fighting battles in court only to pray we’ll win.

Don’t get me wrong. These things are all important. They make our life easier and protect us in a world that has become chaotic at best.

But in our exhausting reach to protect everything we call ours we often forget..

Our mere existence depends solely on a God who simply asks us to have faith in Him.

[bctt tweet=”Our mere existence depends solely on a God who simply asks us to have faith in Him.” username=”cassierajewich”]

Tomorrow it will be seven days since I sat in that courtroom and bawled my way home. I don’t know what is in store for the weeks and months to follow.

One thing is for certain, I heard the loud echo of fear and I stood my ground. I am choosing to sit in Truth.

And yes, I’m fighting to stay there. You want to join me?