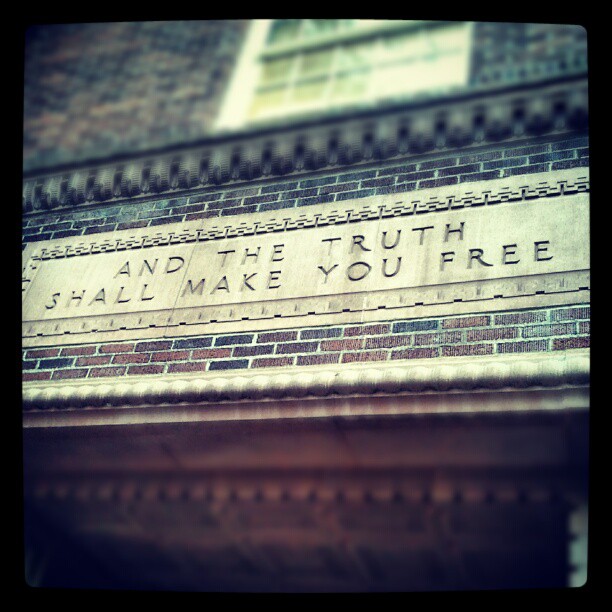 We Are Made to Live in Truth 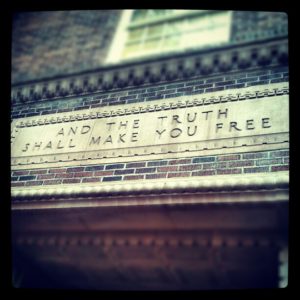 For thousands of years, generations of people have tempted to alter the definition of truth. Live outside of it, challenge it or simply, go against it. Growing up I recall forming my own opinion and believing “truth is relative”. My truth, of course, being most important here.

What I discovered along the way?

It was more like a silent rejection and turn toward the world while ignoring His presence in hopes He would forget His specific plan for my life.

The problem? He wanted me to be obedient to His Will and live in His truth. I didn’t want to.

Because I had, what I thought at the time, plans that were better. Or at least, for me, much easier.

You may be able to relate to what I am talking about. Living the life you want. Doing exactly what you want regardless of taking responsibility. Regardless of the impact.

When I was four, I took my aunt’s camera from her vanity drawer and snapped away at myself in the mirror. I had SO MUCH FUN taking those pictures that day. Aw, the freedom of doing what I wanted. A characteristic I later found would fail me when not done in good accordance. My sneaky little four-year-old self, very quietly, placed the camera back in my aunt’s drawer. Feeling safe that that particular moment of fun was kept a secret between myself and the vanity.

Weeks later we returned to my aunt’s home for a visit. As I was busy playing intently from the living room, I heard, “Cassie. Cassie. Did yoooou take pictures with my camera?”

My secret? Not so safe.

It turns out that sneaky things done on your own time can have a way of turning up.

Recently, I had the opportunity to speak to a very dear friend of my daughter’s over a heartache she was facing.

After speaking with her, she chose to do a very brave thing, and that was to share her situation with her mom. The following morning I sent her this text as she headed out into a world that can be less than truthful:

“Protect your mind today. Be careful what you allow into your mind and heart ❤️. The TRUTH is …that you did a very brave thing. Growing up is hard. Keeping secrets is even harder… in the long run. For now, it seemed easier to keep this away from your mom, but I promise, we are made to live in truth and not secrets. That is how God uniquely designed us.

However your mom chooses to handle it won’t be as bad as keeping this bottled up in your little being. This is not about ‘telling your mom’. It’s about you. It’s about you being free from the sadness and letting it out. Rewriting your truth and who you are in Christ is the most important thing you can do for you right now. You are NOT defined by your mistakes. But you can be heavily impacted by not walking out of them and staying in them. I want more for you!! More for all girls who go through this. I love you, sweet girl!”

You see my friend, living in the truth has a way of setting us free. Scary as it is. This young girl was feeling the typical fear we all face when we are carrying a shameful burden and pondering it coming to light.

Besides her secret coming out she was also facing the fear of sacrifice.

Because coming out of the darkness and losing a life you have become comfortable with, means sacrificing what you have come to know and love. What you perceive as freedom.

Your personal theory of relative truth.

Not my way, but Yours…

It wasn’t until I was thirty-three and had wrestled with God’s truth for nearly 15 years, that I began to turn my view from what I had been chasing for myself to what His plan was for me. I can’t tell you how sweet it was to finally let go. Trying to hold it all together all those years was like carrying one thousand pounds of burdens and grinding against a universe I wasn’t meant to be in.

Although my story is unique to me, God chooses to work in each of us as he sees fit. The relief was immediate. Well, immediately after fifteen years of being a stubbornly rebellious idiot! The burdens fell off of my shoulders and onto his lap as mountains began to move that I had been keeping in place. Mountains that were in my way. You see, I was in my way.

My hope for all of us?

That no matter what our relative theory of truth may be, we would seek to live in the most honest place within ourselves.

If you are a single mom living a life you are not called to, begin today to change your truth. Please do not continue holding on to whatever is holding you back. If you are unsure where to begin, start with asking God for the desire to change it. And, finally, if you don’t believe in God, begin asking yourself and seeking a new truth that will allow you to create a life worth living.

That doesn’t mean perfect and mess free. It means you live this life with no regrets and fought hard to be ever so present in it.

Photo credit: The Truth Shall Make You Free; freeimages.com/photographer/yournewven-80425